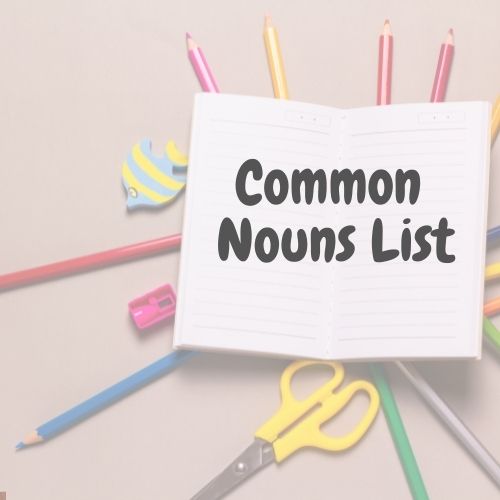 This is a blog post about common nouns, which are words that name people, places, or things.

The common nouns list will be in alphabetical order. It includes an explanation of the word and its meaning and examples for each letter of the alphabet.

When you’re done reading this article, you’ll know how to use every single one!

Meaning of the Nouns

Action- verb or gerund, an action that is being done

Adjective- a word describing a noun

Adult- fully grown-up person who is over eighteen years old.

Animal- a creature that is not human

Back- the part of an animal’s body located in its rear, or one side of a thing from which it extends behind the main front portion

Bed- place for resting and sleeping

Book- written work which can be fictional, nonfictional, etc. held in the hand/stored on pages for reading purposes

Box- a container with a top lid that opens and closes

Car- motor vehicle for transportation with four wheels and an engine, enclosed compartment for passengers in the front seat(s) and back seat(s)

Clothes- worn on the human body for protection or warmth; used for covering the body

Company- a business organization formed for profit through the investment of money or labor; also refers to a group of people with common goals/interests

Country- area of land with its own government, for example, Ireland, Spain, France, United States of America.

Cycle- series of events that repeat themselves over time in the same order as they occurred before; also refers to one complete turn of an object around itself or another object

Day- the period between sunrise and sunset; also refers to the 24-hour period beginning at midnight.

Dictionary- a book containing words usually arranged alphabetically along with their definitions/explanations for use in reading, writing, speaking, etc.

Direction- path or way of facing/moving, relative to another position or object that is used as a standard for orientation in space.

Door- allows us to enter or stops us from entering a building.

Earth- the planet where humans live.

Electricity- energy produced from the flow of electric charge, for example, it can be used to power laptops, TVs, fridges, etc.

Employee- a person employed by a company

Face- the front part of the head, which includes the eyes, nose, and mouth

Farm- the land where plants and animals are raised/produced for food, also refers to a business organization that grows crops or rears farm animals

Father- male parent of an offspring; can refer more generally to any older man in authority such as the father of a family, head of household, etc.

Floor- bottom surface of a room or vehicle

Friend- a person you know and like, but are not related to or married to

Fruit- plant product is eaten as food for humans/animals

Furniture- objects used in a house or other buildings that you can move around, including chairs, tables, beds etc.

Future- coming time/period after the present or past

Garden- an area used as a park/recreational place with plants growing in it; it can also refer to an enclosed space where flowers, fruits, etc., are grown.

Government- a group that rules over an area

Group- a number of things or people considered together

Hill- raised area of land; can also refer to a high point in the landscape.

Holiday- period of time when an employee does not work for the purpose of enjoying themselves, but are paid for this time

Idea- something in the mind which is formed by thought, experience or the senses

Job- work that is usually paid

Kitchen- room used for cooking and preparing food, including a stove/oven etc.

Market- place where people can buy and sell goods

Material- something that has been made from a natural substance such as wood, metal etc.

Mobile- a handheld device used to take and make calls

Name- word or phrase used for identification, including given name and surname

Plant- living organism without a brain/spine etc. which can make its own food

Park- area of land used for recreation, including sports and walking etc.

Party- a social gathering involving entertainment and food, generally held by invitation for people to celebrate an event or to mark a special occasion

Place- name of a town, city or country

Queen- female ruler of a kingdom, state or power

Road- hard surface that people/vehicles travel on for transport

Room- space within a building enclosed by walls and floor/

Ship- watercraft used for transporting people or goods over sea

Shop- store where goods are sold

Size- the magnitude, amount or quantity of something

Son- the male person born in relation to people or animals

Street- road that runs through a town or city

Table- piece of furniture used for working at, eating

Taxi- vehicle used for transporting people in return for payment

Tea- hot drink made from leaves of the tea plant

Time- unit of measurement used for counting periods, including day and year

Vehicle- machine for transporting people or goods by land/water/air

Water- chemical substance that is a clear, tasteless and odorless liquid

Weather- state of the atmosphere with respect to temperature and wind, including rain etc.

Year- period of time between one birthday and the next; with about 365 days in a year

Zoo- place where animals are kept for people to look at