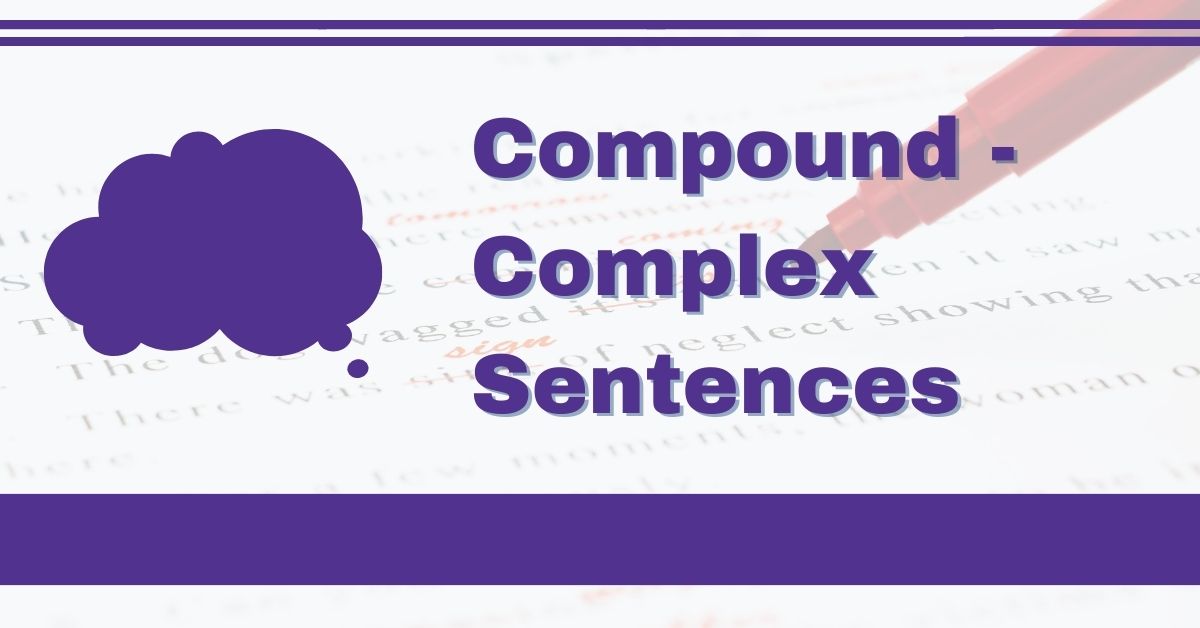 Let’s look at the basic definition of a compound-complex sentence with examples.

What is a compound-complex sentence?

In short, It’s a sentence that has at least two independent clauses and one or more dependent clauses. For example, Mark doesn’t like horror films because he has nightmares, so he doesn’t watch them.

What is a clause?

A clause is made up of a subject and a verb. There are two types of clauses: independent and dependent clauses.

What is an independent clause?

An independent clause is a complete thought. It has a subject and verb. For example, “the toddler ate cookies.”

What is a dependent clause?

“Because I was so hungry” and “After Mary got home” are examples of dependent clauses because they provide more information about the main sentence.

A dependent clause begins with a subordinating word. Common subordinating conjunctions include when, whoever, because, if, as, that, where, though, since, etc.

What is a compound sentence?

A compound sentence has two or more independent clauses. This is two or more complete sentences joined together by a coordinating conjunction.

Coordinating conjunctions are FANBOYS: for, and, nor, but, or, yet, so.

Compound sentence example: “He wanted to go outside, but he couldn’t find his shoes.”

Here are some other common examples:

“I went to the store, and I bought some apples.”

“Maria couldn’t sleep last night, yet she arrived to work on time.”

I tried removing the comma in my compound sentence, and here is what Grammarly (my grammar and writing assistant) had to say:

What this means is we have to add a comma before FANBOYS to join two independent clauses. However, if both sentences are very short, it is acceptable to remove the comma.

What is a complex sentence?

Examples of complex sentences: “When the toddler visited his grandmother’s house, he ate cookies.”

Or the independent clause can come first: “The toddler visited his grandmother’s house when he was promised cookies.”

Note that when the dependent clause comes before the independent clause, the two clauses are divided by a comma; otherwise, no punctuation is needed.

What are compound-complex sentences?

I sometimes go for a run in the morning before work, but it was stormy today.

We know that “he doesn’t watch them” and “Mark doesn’t like horror films” are independent clauses because they are sentences that can exist on their own.

Let’s provide examples and explanations for the following compound-complex sentences:

1) Mark doesn’t like horror films because he has nightmares, so he doesn’t watch them.

In this example, we see the phrases “Mark doesn’t like horror films” and “he doesn’t watch them” making up the independent clause because they are sentences that can be complete sentences on their own.

The single dependent clause is “because he has nightmares” and cannot stand on its own. We use the coordinating conjunction “so” to join the sentences.

In this sentence, “when I grow up” is the dependent clause, while the other two sentences are independent clauses. We use “and” as the conjunction to join them together.

3) Mary forgot her aunt’s birthday, so she sent her a present when she finally remembered.

In this sentence, “when she finally remembered” is the dependent clause.

How to Write Compound-Complex Sentences

Creating these sentence types needn’t be so difficult.

Let’s come up with two or more sentences and one bit of extra information. Then we just have to use conjunctions to link them up.

The dog played fetch in the garden.

The independent clause is a complete sentence on its own and will work in our compound-complex sentence.

The second clause should be related to the first one with information on the same subject, describing the action or adding information of equal importance.

The dog caught the tennis ball.

This is not a complete sentence; instead, it gives us more information about the situation. Here is our dependent clause:

while I was sitting on the park bench.

Conjunctions are the connecting words we use to put the sentence together. As we have already said, the most important type of conjunctions we use in a sentence are coordinating conjunctions in compound-complex sentences.

We can remember coordinating conjunctions using the acronym FANBOYS (for, and, nor, but, or, yet, so).

The dog played fetch in the garden

The dog caught the tennis ball.

While I was sitting on the park bench.

Let’s put it all together:

The dog played fetch in the garden and (the dog) caught the tennis ball while I was sitting on the park bench.

We might leave the second the dog to not sound so repetitive, but other than that, it is a perfect sentence.

We need to break up the long sentences with correct punctuation.

Run-on sentences happen when we don’t use any punctuation or conjunctions to connect them.

This is not a great example of a compound-complex sentence as there are no linking words, just commas. This is known as comma splicing. There has to be different punctuation or word for the sentence to be correct.

As I type this on Grammarly, I constantly see feedback that I thought would be worthwhile to share with you!

Here is how we can fix it:

When I grow up, I want to be a writer, and my mom is proud of me.

or alternatively: I want to be a writer when I grow up, and my mom is proud of me.

Now we have a connecting word, and there is no comma splicing. The sentence is less choppy by including the conjunction “and.”

When I grow up; I want to be a writer; my mom is proud of me.

We can also use semicolons to connect clauses without coordinating conjunctions, thereby avoiding the dreaded comma splice.

Use the compound-complex sentence definition and examples to guide you as you form your own. Good luck!