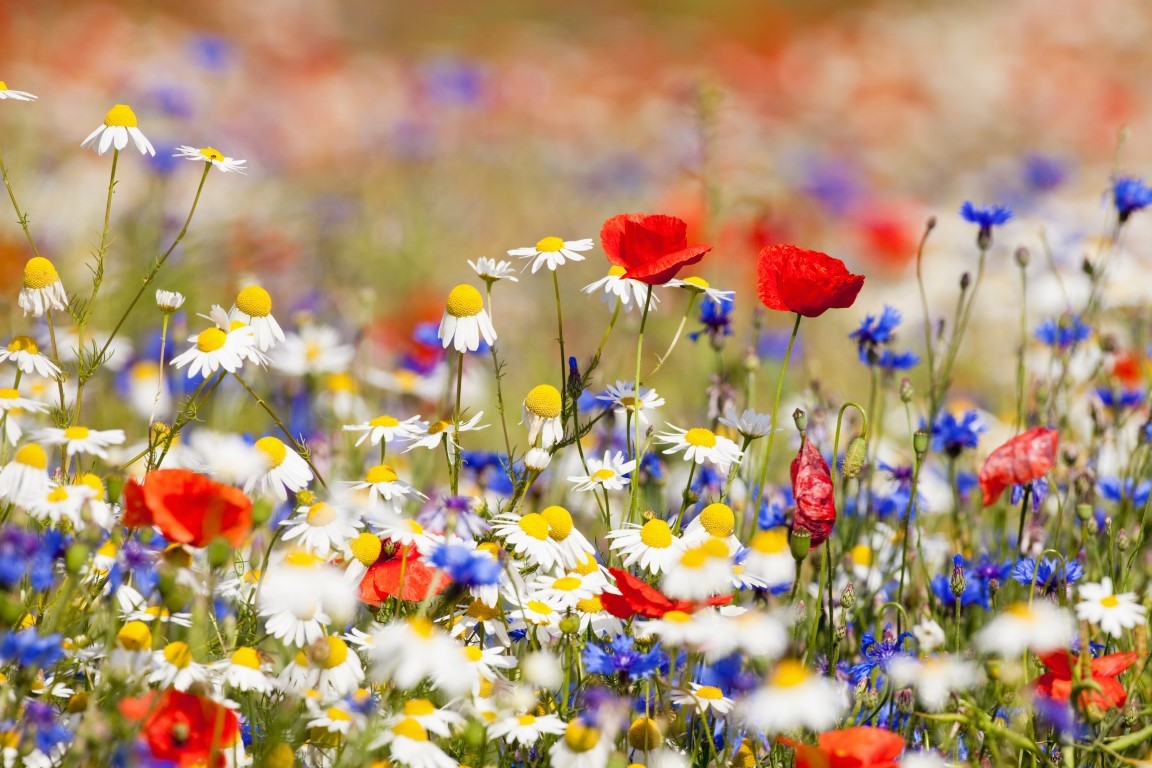 In the English language, there are a variety of flower names.

Here is a list of some flowers and their meanings.

The rose symbolizes love and purity in many languages and cultures around the world. It is also associated with innocence, beauty and perfection.

In some cultures, a red Rose means “I love you.”

The sunflower is the state flower of Kansas and reflects light like the sun does.

They are often given out at weddings, especially around the time of summer when they’re in full bloom.

The daisy flower is the national flower of Denmark, and symbolizes innocence, purity, and loyalty.

The daffodil is a symbol of rebirth and is a welcoming sign of the spring season.

The lily was a sacred flower of the Egyptians, Greeks, and Romans because it represented purity of heart, mind and body.

In Christianity, the white lily represents the purity of Mary, the mother of Jesus Christ.

If ingested, lilies can be poisonous to humans and animals. Some kinds of lillies can even be deadly.

The orchid flower has a variety of meanings depending on the culture and language it is spoken in.

During the eighteenth and nineteenth century in Europe it was common to use orchids in love potions.

The ancient greeks believed that the orchid symbolizes love, passion and fertility.

In Chinese culture, it was considered the essence of perfection and could be seen at the Spring Festivals.

It’s said to be a representation of all things good, including friendship, honor and perfection.

However, this flower is often called the “flower of death” in Asian cultures because of its widespread use as gravesite decoration.

The lilac flower is a very popular flower in gardens and parks. They are native to southeastern Europe and eastern Asia. They symbolise Spring and renewal.

The Hyacinth flower (hyacinthus) is an easy-to-grow, Spring flower.

It symbolizes peace and beauty but also power and pride. It can be found in Christian churches as a symbol of love and joy.

The gladiolus plant symbolizes courage and power throughout different cultures and languages.

It is the official state flower of Punjab.

It often symbolizes joy and happiness.

The carnation flower is term believed to be derived from the Latin ‘carnis,’ meaning flesh.

The carnation is known as a symbol of divine love, excellence and distinction.

It is a suitable gift on occasions such as Mother’s Day, birthdays or an anniversary to celebrate your love for another person.

The gerbera daisy flower symbolizes vitality and cheer as well as innocence and purity in many different cultures.

It is also known as a sign of hope throughout the world.

These flowers are native to tropical regions in Asia, Africa and South America.

Tulip, formerly tulipa, means “turban” because many sultans in Turkey wore the tulip in their turban.

This tulip has different meanings depending on the color, but generally speaking they stand for a perfect or deep love; whether it’s for your spouse, children, parents or somebody else.

The flower name “rosemary” comes from the Greek word “ros marinus,” which means “dew of the sea.”

It’s known for its fresh, pine-like scent and is often used in cooking.

Rosemary symbolizes remembrance and friendship in many different cultures.

In Greek culture, the iris is a symbol of harmony and peace and they associated with the goddess of the rainbow.

The iris is said to symbolise wisdom, trust and hope.

This flower’s name comes from the Latin word ‘mentha.’

It produces a refreshing taste and blooms beautiful pink and purple flowers.

It symbolizes comfort and relief.

This flower’s name comes from the Latin word ‘lavare,’ which means to wash.

It’s a symbol of purity, grace and calmness.

This plant is often used as a symbol of humility.

They are said to bring good luck in love and are a favorite to royal brides.

However, they can be poisonous when ingested.

The pansies are known for their cheerful heart-like shape.

They’re symbols of love, happiness and thoughtfulness throughout the world.

The peony is often associated with wealth and is a national symbol in China.

They signify prosperity and a happy marriage when given at weddings.

This is called a snowdrop can be seen appearing as early as the month of January, but they are named after earrings not snow!

They symbolise purity and spring.

Cyclamen flowers grow a short underground stem and are popular as a garden plant.

They represent an empathetic, devoted heart.

This plant is called a dandelion which comes from the French word “dents de lion” which means “lion’s tooth.”

Their seeds can be carried up to five miles and can reach a height of 17 inches.

Despite being considered a weed, this flowering plant represents growth and healing.

The sweet pea is a climbing plant that can grow one to two meters.

The dialiah was originally considered vegetables due to their edible tubers.

This flower name represent many different things such as elegance, change and even love and commitment between two people.

This flower name calendula is derived from the Latin term ‘calendae’ which means ‘little calendar.’

Calendula is a summertime favorite and can be grown easily in sunny locations.

They are often considered one of the easiest and most versatile flowers in the garden.

The poppy flower can be over one meter tall, mostly found in the Northern Hemiphere.

It is a popular flower used to represent Remembrance Day.

Bluebell is a wildflower mostly grown in the UK.

It takes years for a bluebell seed to grow into a flower.

They symbolize gratitude, love and humility.

Marygolds are some of the most popular flowers.

They can be found in quiet waters in streams, ponds or other places prone to flooding.

The flower name has many meanings, such as creativity and a desire for wealth. But they can also represent despair over the loss of a loved one.

This flower’s name comes from the Arabic word “yasamin,” which means “fragrant thing.”

It symbolizes modesty and good luck in some cultures.

Honeysuckle flowers produce nectar however the berries are poisonous and shouldn’t be eaten.

They are a symbol of pure happiness.

This flower’s name comes from the fact that its flowers are shaped like gloves that would perfectly fit a fox or other small animal.

It symbolises a lot of things that are both positive and negative, such as communication, cooperation, magic and energy.

The cherry blossom is the national flower of Japan.

They have a short life and the blossoms start to fall; providing a beautiful sight for passerbys.

Buttercups were given their names due to the belief that they gave butter their golden hue.

They are poisonous to humans and cattle.

They are associated with children and youth.

This mimosa is used as a symbol in poetry that typically represents the sun.

It is a sensitive plant and bends when it is touched.

The shamrock is a three leaf clover and one of the widely recognized (unofficial) symbols of Ireland.

It is normally associated with St.Patrick’s Day.

It orignates from the Irish word ‘seamrog’ which means ‘little clover’ or ‘summer plant.’

Despite what the name suggests, violets can come in many colors, such as blue, white, yellow and cream.

The cactus is a succulent because it stores water in its roots and leaves.

The cactus blooms last one or two weeks and indicate improper watering or sudden temperature changes.

The camellia flower is beautiful in winter and offers a variety of bloom colors.

They are Alabama’s state flower and symbolize adoration and devotion.

Camomile comes from the greek terms ‘chamos’ and ‘milos’ which means ‘apple.’

Camomile got its name because it grows close to the ground and smells like an apple.

The leaves and flowers are safe to eat, and people often enjoy drinking camomile tea.

I hope you enjoyed this article on flower names in English. Don’t forget to share it with a friend! For more English learning, check out these links: