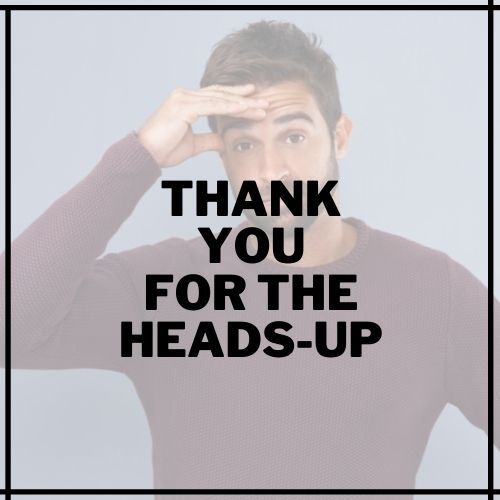 “Thank you for the heads-up” is a phrase used to show appreciation for someone who has given you information that could be potentially helpful.

It is usually used to respond to someone who has just warned you about something, such as an incoming storm or an unexpected change in plans.

But how exactly do you use this phrase correctly? And when is it appropriate to say it?

In this blog post, we will answer all of your questions about the idiom “thank you for the heads-up” and give some examples of its usage!

If you ever hear anyone saying “heads up,” it means “lookout!” or “be careful!” It is a warning to the other person.

It is important to listen and take action when you hear this phrase!

It can often be used to warn about a danger overhead.

For example, this phrase is often used in sports. If you are playing a game of catch and the ball will hit a person, you might say “heads up!” to warn the person so they can get out of the way.

Heads-Up or Heads Up

As an exclamation, we can shout or exclaim, “heads up!” This calls immediate attention to danger or warning. We don’t need to use a hyphen when “heads up” is an interjection.

“Heads-up” spelled with the hyphen can be a noun or adjective.

As a noun, heads-up gives a warning. For example, “just sending a heads-up that the inspector is coming!”

Heads-up can also be used as an adjective to mean alert and resourceful, although it seems less common to use it in this way. “The heads-up team played amazingly on the field.”

Other Example Sentences With “Heads Up” and “Heads-Up”

Thank You For the Heads-Up: Meaning and Usage

When someone gives you a heads-up about something, they are letting you know about an event or situation that will happen in the near future.

This information could be helpful to you, so thanking the person who gave it to you is always polite.

You can say “thank you for the heads-up” in response to someone who has just given you a warning, or you can say it as a general thank you for any information they have shared with you.

Here are some examples of “thank you for the heads-up” in action:

In this scenario, a storm is coming. Person A warns Person B about the storm.

Person A: The storm is going to hit in about an hour, so make sure you take your things inside.

Person B: Thank you for the heads-up! I’ll go ahead and move my car to the garage.

In this scenario, there is a speed camera on the road. Person A warns Person B about the speed camera.

Person A: There is a speed camera on the N7.

Person B: Thanks for the heads-up! I’ll be careful.

In all of these examples, Person B is thanking Person A for informing them of an upcoming event. This phrase can be used in any situation where someone has given you helpful information.

Is “thank you for the heads-up” formal or informal?

“Thank you for the heads-up” is an idiom that is predominantly used in informal situations.

It can also be used in business settings between colleagues. It is still a relaxed, more informal phrase, however.

Thank You For The Heads-Up: Alternatives

If you don’t feel like saying “thank you for the heads-up”, there are a few alternatives that you can use.

How do you say “thank you for the heads-up” professionally?

You can say “thank you” instead of “thanks” when you want to sound more formal.

Other ways to say it:

Origin of the Term Heads-Up

According to The Wall Street Journal, the term “heads-up” originated from basketball practice and military drills.

At the time, heads-up encouraged soldiers to straighten their backs and hold their heads high. It also meant for them to be strong and vigilant, metaphorically speaking.

In baseball in the 1900s, “heads-up” was a phrase that reminded the team to stay alert and be ready for the ball when it comes.

Thank You For The Heads-Up: Conclusion

In this blog post, we have answered your questions about the phrase “thank you for the heads-up.” We have explained what it means and how to use it correctly.

We have also given some examples of its usage in different situations. “Thank you for the heads-up” is a polite way to show gratitude for someone who has shared helpful information with you.

When do you use the phrase “thank you for the heads-up?”